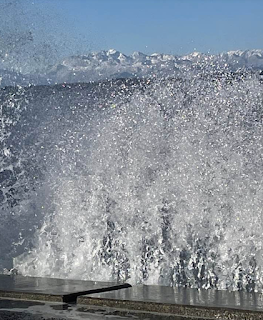 Alki Beach, West Seattle, WAMy hope for you is that 2022 is full of clear skies, Olympic Mountains, and large flairs of creativity. One can hope, right? And there is new scientific evidence that we have some sway in how we perceive our year, our lives. Perhaps it's as simple as "you are what you eat" tweaked to "you are what you believe." I'm no psychologist but you can check out what Psychology Today mentions here.
Today I am grateful for the poetry books of others as well as for the wonder of my own deep revision.
This afternoon, I'm halfway through Disappearing Queen by Gail Martin, winner of the Wilder Prize by Two Sylvias Press and I don't want it to end. The different narrative threads include the life of bees, the life of an older American woman, and the accrued losses implicit in both.
So far, my favorite poem is "Matriarch" which begins with an epigraph from the Sylvia Plath poem "Stings" and then takes six lines from Plath to rework throughout Martin's own work; a Plath line for each Martin stanza. The poem reads as a sort of nons form sestina, Elizabeth Bishop-esque in its exactitude and directness.
A tooth is just one kind of ache. O body. You are a fickle clock. Your gods fade and wane and we deal and dicker with them as if they are street vendors... from Crave
I love this attempt to bargain with the aging process, with the body that insists on surprises. The poems accrue in their wisdom and in their varied forms of knowing. Gail Martin is a poet I look forward to hearing from again.
And somehow, the day is almost gone and my poem "architectural digest, reboot" is nowhere near done; neither is "The Pickle Barrel at Morse's". Maybe they never will be. When working on new poems there is simply joy at  attempting something new; a deep feeling of gratitude for the creation.
May your creativity flair in unexpected and exciting ways; may your creativity swerve sideways or even take a small rest. I feel so lucky to be living this life as a writer and a secret painter; to be creating community and also to love the solitude.
Wishing you a better and a more beautiful 2022 than you can imagine.