The Joy of Poetry (That Swings Both Ways) Academy of American Poets, Practicing Poet, and the Southern Review

I wonder if Henri Matisse ever imagined that his paintings would travel around the world with the choice click of a few keys? The internet is known for many things --- but access to the arts is not one I hear of very often.

This summer I was wildly honored to have my poem "To The New Journal" published in the Summer 2018 Issue of the Southern Review. This is the third time I've been published in SR and I am a true fan of both the words and the visual art that they publish. Their editors are professional, kind, and smart. But there's one thing.

The Southern Review doesn't feature much work on their website and so once the physical object of the journal is read and put on the shelf (and maybe tossed from libraries at a later date) most of the poems and prose are gone. Enter the Academy of American Poets with a new project: to showcase more poems on their website. Through an agreement with the Southern Review and Tin House, poems that were published in these print journals may now have a forever home as part of the Academy's curated collection. This is the reason I can share "To the New Journal" with you.
.
Much like the Poetry Foundation website, the Academy of American Poets website seeks to provide an essential resources of poems, essays on poetry, poet bios, and lesson plans to anyone who is interested. Need a poem to read for a wedding or for a divorce? These websites can help! Teaching a poet and want to bring their voice into the classroom? These are great sites to access.

However, sometimes poems swing the other way: from the worldwide ether onto the printed pages of a book. My poem, "Boketto" based on the Japanese word which loosely translates to, to stare into space with no purpose, appeared on the Academy of American Poets site two years ago. This month, "Boketto" stars in the new "must have" craft book, The Practicing Poet, Writing Beyond the Basics, by editor, poet, and publisher extraordinaire,  Diane Lockward.

Diane contacted me and asked for permission to reprint "Boketto" in her newest anthology / craft book (this is her third and each one is worth owning) and I happily agreed. In The Practicing Poet, Diane has created a prompt for a "weird word poem" based on my work. She has also done an explication of the poem that showed she had read the work carefully noticing the focus on double-barreled words and chiasmus (and no, I didn't know the word chiasmus before yesterday) but I like it and it describes a key strategy of the poem.

So this month I get to swing both ways: page poems onto the web and web poems onto new pages. I'm feeling very lucky indeed. 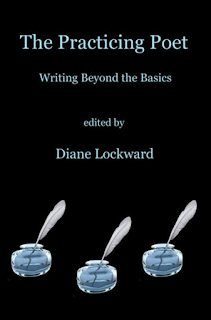