"Feminist Poetry is having a Renaissance" This Week's Headline! - Poems, Events, and a Confession

Sometimes it's amazing what we can pull together in an hour. Last Friday afternoon, I learned our MC for the Nasty Women Poets: An Unapologetic Anthology of Subversive Verse reading, Martha Silano, was unable to make the event; could I step in? Sure, anything for poetry! The six women in the photograph below made the evening memorable --- as did the standing room only audience at Open Books. 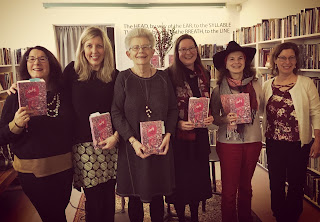 The same day as our reading, an article was published on the PBS Newshour "Feminist Poetry is Having a Renaissance." I must confess, the headline had me doing a doubletake.

I've written about outsider artists such as Myra Albert Wiggins and Hannah Maynard --- women photographers of the late 19th century that were decades ahead of their time. More recently, I've focused my poems on the work of the three Surreal Friends --- Leonora Carrington, Kati Horna, and Remedios Varo. Women artists who emigrated from Europe during World War II and lived in Mexico City gaining acclaim for their work in a kind of sideways fashion.

For years my poems have focused on these women --- and women in my own life.  I know that being part of a community of women poets and artists has deeply influenced my work in subtle and less subtle ways.

This past winter while at a writing residency, needing to write out of my own traumatic past, I turned to the new anthology Nasty Women: An Unapologetic Anthology of Subversive Verse to give me the extra push I needed. If these women could write eloquently and with anger concerning abortion, rape, heartbreak, and healing --- who was I not to write my own truth?

This Saturday, fantastic friend and poet, Kelli Russell Agodon and I will teach a one-day writers retreat in Seattle. The request came from women in the community to add another day of writing  and community, a mini version of Poets on the Coast which we have been running for almost 8 years.

In other words, although writing is usually a solitary endeavor, the lives of women writers and artists is not. The artistic collaborations and personal friendship between Leonora Carrington, Kati Horna, and Remedios Varo has been documented in a gorgeous book, Surreal Friends by Stefan Van Raay and Joanna Moorhead. Which important artistic and poetic friendships will be documented for this time we live in?


Oh yes, I almost forgot --- here are links to two poems of mine about women that were published this week. In the gorgeous Construction Magazine you can find "You've Always Had The Power---" a political retelling of Dorothy's commitment to Oz and in the Baltimore Review, "Coordinates," about a powerful friendship between women --- a subject whose time has come.