Meet A Poet At Your Table: Elizabeth Austen


I first met Elizabeth Austen over the internet. Fourteen years ago, I moved to Seattle and Elizabeth was kind enough to reach out to me over a poetry chat forum. Since then she has become a familiar face --- and voice --- to the greater poetry community. As a producer at KUOW, Elizabeth is the reason we can listen to poems on our way home from work in the car  or wherever the radio is turned on. However,  Elizabeth Austen's own prize-winning poetry is the attraction here.

Elizabeth Austen is a Seattle-based poet,performer and teacher.
Watch this short video profile on ArtZone (segment begins at 1:50).
She spent her teens and twenties working in the theatre and writing poems. A six-month solo walkabout in the Andes region of South America led her to focus exclusively on poetry. She is the author of Every Dress a Decision (Blue Begonia Press, 2011) and two chapbooks, The Girl Who Goes Alone (Floating Bridge Press, 2010) and Where Currents Meet, part of the 2010 Toadlily Press quartet, Sightline.

Her poems have appeared online ( The Writer’s Almanac, Verse Daily), and in journals including Willow Springs, Bellingham Review, the Los Angeles Review, the Seattle Review, DMQ Review, and anthologies including Poets Against the War, Weathered Pages and In the

A Review of Every Dress A Decision:

This is a book of baptism by fire (“House Fire”) and baptism by total immersion (on “Shi Shi Beach”). It is a record of one woman’s search for a lost self and her decision, daily, to find or be a new self, as healed or whole as any of us might be who take the same fearful walkabout.

I say “walkabout” due to Austen’s bio at the back of the book: “A six-month solo walkabout in the Andes region of South America led her to focus exclusively on poetry.” Her other interest was theatre, and several poems follow that route, with titles like “Dramatis Personae” and “Scene: Hotel, Interior.”

I say “fearful” because traversing the earth alone is scary, as is life in general for “The Girl Who Goes Alone,” a fine ramble of a poem and title poem of a previous chapbook. This poem acknowledges fear and the frequent supposition that we do brave things without fear, though where would be the courage in that?


This girl
who goes alone
is always afraid, always negotiating to keep the voices
in her head at a manageable pitch of hysteria.
It’s even brave, these days, to say “hysteria” in a poem, especially one forging a strong female identity after a period of confusion—“so foreign, even to myself.”


Excerpt from a review at "Prick of the Spindle"

Light takes the Tree; but who can tell us how?
—Theodore Roethke

It’s time. It’s almost too late.
Did you see the magnolia light its pink fires?
You could be your own, unknown self.
No one is keeping it from you.

The magnolia lights its pink fires,
daffodils shed papery sheaths.
No one is keeping you from it—
your church of window, pen, and morning.

Daffodils undress, shed papery sheaths—
gestures invisible to the eye.
In the church of window, pen, and morning
what unfolds at frequencies we can’t see?

Gestures invisible to naked eye,
the garden opens, an untranslatable book
written at a frequency we can’t see.
Not a psalm, exactly, but a segue.

The garden opens, an untranslatable book.
You can be your own, unknown self—
not a psalm, but a segue.
It’s time. 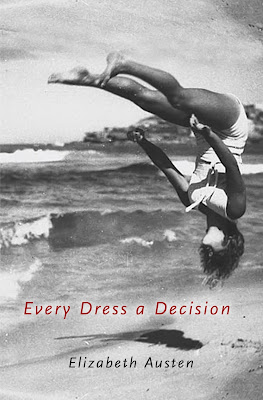 For more information on inviting Elizabeth to your table please write to "poetatyourtable(at)gmail.com
Email Post