A Poet At Your Table - Introducing Annette Spaulding-Convy


I am thrilled to introduce Annette Spaulding-Convy in our second week of introductions of A Poet At Your Table 2013-2014 sponsored by Seattle Arts and Lectures, Book Lift, and Crab Creek Review.

To find out more about Annette you can check out her brand new blog at Tea with the Hermitess right here. Annette was also a Jack Straw Fellow in 2011 and a podcast of her reading her work is available here.


Book Reviews of In Broken Latin

The Ex-Nun, The Soldier's Wife, and the Fabulist
by Robert Peake at The Huffington Post


Annette Spaulding-Convy's In Broken Latin (University of Arkansas Press, 2012) addresses the female body in service to a calling--first as a nun, then as a mother. Each section of Spaulding-Convy's collection is prefaced by pairing a quote from a female saint with a quote from a "bad girl" such as Madonna, Mae West, or Sylvia Plath. These binary views of womanhood are exemplified by professional men in "from Uterine Dogma", where the doctor signing off the pre-convent physical wonders whether she is a virgin as he "rubs my back, tells me / he wants his own daughter // to have a calling" and the dentist says the same while "brushing his crotch / too close to my cotton- / packed mouth."


Such imposed views from the male world coalesce in "Everything Except her Head", which begins with a bulletin about Cardinal Joseph Ratzinger arriving to inspect the seminary to ensure that women are not actually studying, but instead assisting "with the preparation of desserts and cocktails". Part II of the poem, "Severed Hagiography", catalogues the parts of female saints preserved by the patriarchy as relics, underscoring the double meaning of the main title through the church's most conspicuous omission--their heads.

Spaulding-Convy herself was a nun, and thus, readers can assume that much of this book is at semi-autobiographical. According to her website, she spent five years as a nun in the San Francisco area. Furthermore, in her acknowledgments page, she thanks many of the sisters who appear in her book, saying “I’m not sure you would have approved of my poetry, but know that I am forever grateful for the love of ideas, literature and art you shared in your classrooms.” It’s apparent, that through her collection, Spaulding-Convy is passing this love along. 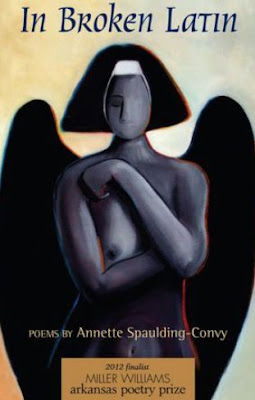 There Were No Rules About Underwear


My friend, the Carmelite, could only wear white

but my Order was progressive—red satin, cut

to show some hip, a midnight-blue Wonderbra


hidden under my habit. The fathers were perceptive, not priest

fathers, but men who flirted with me


while their daughters lit Virgin

of Guadalupe candles in the chapel alcove,


men like the firefighter, who ran into my bedroom


in the cloister attic. I pulled the sheet around my body

as he looked at black lace on the floor—


I need to feel your walls to see if they’re hot.


For more information on inviting Annette to your table please write to "poetatyourtable(at)gmail.com