The Big Poetry Giveaway 2013 from Me to You

I thought I would follow Kelli's lead and just put a few things about myself here as a way to bring the blogosphere a bit closer to home.

A few things about me:

1. I have a new tuxedo kitten named Mr. Watson, or Waston for short.

2. My fourth book of poems, Cloud Pharmacy, will be published by White Pine Press in 2014.

3. Smoothies are my favorite food --- this may have something to do with liking to mix magical potions.

4. I have lived on three continents but now call Seattle, Washington my home.

6. My religion is a combination of travel and poetry with visual art tossed in as well.


Now that the giveaway is underway, here is what you can win from here. One book from me, The Alchemist's Kitchen  and one from the fabulous poet, Catherine Barnett, whose book, the game of boxes, won the James Laughlin Award this year. And finally, with the travel season starting, I'm adding a copy of Cures Include Travel. 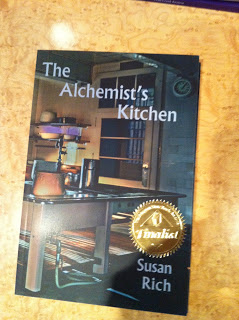 I thought I would display one poem from each book here. I hope you enjoy one or the other, or both!

Everywhere, everywhere she wrote; something is falling –

a ring of keys slips out of her pocket into the ravine below;

nickels and dimes and to do lists; duck feathers from a gold pillow.

Everywhere someone is losing a favorite sock or a clock stops

circling the day; everywhere she goes she follows the ghost

of her heart; jettisons everything but the shepherd moon, the hopeless cause.

This is the way a life unfolds: decoding messages from profiteroles,

the weight of mature plums in late autumn. She’d prefer a compass

and grime of our gutted days, our global positioning crimes.

I had the pleasure of hearing Catherine read from her new poems at Open Books this past December. She takes the familiar and makes it unfamiliar and yet utterly recognizable. Her poems hold me in a trance like state --- they are lyric missives in the way that Rilke or Cavafy write lyric poems.

This is what Ilya Kaminsky writes of Barnett's work: "This collection is utterly modern, particular, and strange-- strange as in not previously visited, strange as in deeply original." 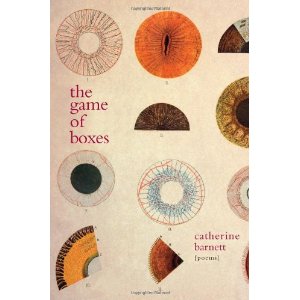 Here's a poem called "Chorus," of which there are several throughout the book -- like a Greek tragedy.

***
Cures Include Travel navigates the space between exploring the world and needing to find a landscape of home. The locations move between Sarajevo, Bosnia where I worked as a human rights supervisor just after the war to Seattle, WA where I began teaching at a local community college and working with  many Somali-American students.

Mohamud at the Mosque

- for my student upon his graduation


And some time later in the lingering
blaze of summer, in the first days
after September 11th you phoned –

if I don’t tell anyone my name I’ll
pass for an African American.
And suddenly, this seemed a sensible solution –

the best protection: to be a black man
born in America, more invisible than
Somalian, Muslim, asylum seeker –

Others stayed away that first Friday
but your uncle insisted that you pray.
How fortunes change so swiftly

I hear you say. And as you parallel
park across from the Tukwila
mosque, a young woman cries out –

her fears unfurling beside your battered car
go back where you came from!
You stand, both of you, dazzling there

in the mid-day light, her pavement
facing off along your parking strip.
You tell me she is only trying

to protect her lawn, her trees,
her untended heart – already
alarmed by its directive.

And when the neighborhood
policeman appears, asks
you, asks her, asks the others –

So what seems to be the problem
He actually expects an answer,
as if any of us could name it –

during the entire service
might hold back the world
we did not want to know.

Leave a comment here and you will be automatically entered in the Big Poetry Giveaway. I'll draw two names on May 1st and announce the winners shortly after that. No blog needed to enter, just an email and a note!
Email Post