Harold and Maude at Highline Community College 40+ Years On

What a knowing glance; a look that jumps off the screen and into this moviegoer's mind forever. I first attended this film when I was fourteen years old. It played at the Allston Cinema on Harvard Avenue in Brookline, Massachusetts for most of my childhood. Harold and Maude directed by Hal Ashby is the movie that defined my adolescence.


I watched this film more times than any single individual rightly should. When I was a teenager I related to Harold more than I care to admit. I wondered why the adults around me seemed so dull and why the books in the children's room of the library were far more exciting than those in the adult section. Whenever I made a new friend I would find out if they had seen "Harold and Maude" and if they hadn't, I insisted we go. For a while, I had a boyfriend who worked at the theater so I didn't have to pay for all 20+ times I sat in the theater listening to Cat Stevens and crushing out on Bud Cort. 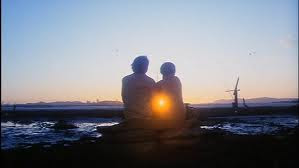 The film spoke to me on a level beyond my comprehension, beyond reason. I wanted to live life fully. Amusement parks, forests, and odorifics all held great allure. No, I wasn't looking for my own version of Maude except in that I was desperate to find someone that could pull me out of myself and show me a less conventional way to live.

Now showing this picture to my Film Studies students, I watch closely as some of them adore the film and others seem repelled. Instead of identifying with Harold, I now find myself drawn more to Maude. It is Maude who has survived the Holocaust, survived her eighty years with a sense of wonder still intact, and lived life on her own terms. Perhaps it's together that Harold and Maude connect as one complete person. Perhaps that's the meaning of their bond.


How to explain love? Poet Rita Dove says if you can explain everything that a poem means then the poem isn't doing its job. I'd like to add, ditto for film. Collin Higgins was just finishing graduate school when he wrote this script and Hal Ashby, the director had yet to make his mark in Hollywood. I can't argue that this is a landmark film except that it is a landmark in my life. And perhaps yours, too.