Wow! I love how one day I can be blogging about a favorite poet and the next day she becomes Poet Laureate of her state. This is especially sweet because of her own history with the state of Mississippi. Because Tretheway's mother was black and her father, white, they were not allowed to marry in Mississippi in the 1960's. By virtue of these laws, Tretheway herself was illegal. It's hard to get one's head around this.

This article mentions that Tretheway received her MFA from the University of Massachusetts. Since she mentions (not by name) the institution where she received her degree in the video I posted previously, I was fascinated. My undergraduate degree is also from UMass --- and I also struggled profoundly with the male professors I had there. In fact, because two of those male professors felt they needed to single me out to tell me that I would not be a writer, I stopped writing for ten years.

In today's very small poetry world it's not polite to mention the sexism that goes on in creative writing programs --- and perhaps it's better now? I don't know. My MFA experience at the University of Oregon was not undercut by any sexist treatment -- but as an undergraduate I suffered a great deal without being able to give sexism it's rightful name.

What I meant to say -- here is one of my all time favorite books of poetry from an amazing poet. 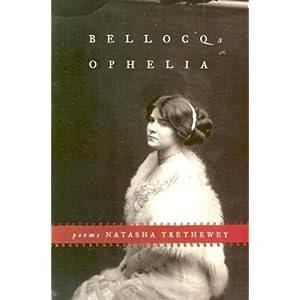 From one photograph (the one featured here)  Tretheway imagines the life of a prostitute in New Orleans. The poems come in the form of letters that "Ophelia" writes to her girlfriend back home. Eventually the frame falls away and the poems are more of an interior dreamscape. Because Bellocq became famous due to the photographs he took of the women at rest -- smoking, daydreaming, washing clothes - there is much here on the nature of photography as well. It's so difficult to write concerning work that one loves. Best to just offer a poem.

Blue Book – June 1911
I wear my best gown for the picture—
White silk with seed pearls and ostrich feathers –
My hair in a loose chignon. Behind me,
Bellocq’s black scrim just covers the laundry –
Tea towels bleached and frayed, drying on the line.
I look away from his lens to appear
Demure, to attract those guests not wanting
The lewd sites of Emma Johnson’s circus.
Countess writes my description for the book –
“Violet,” a fair skinned beauty, recites
poetry and soliloques; nightly
she performs her tableau vivant, becomes
a living statue, an object of art –
and I fade again into someone I’m not.
Email Post
Labels: Natasha Tretheway