Brian Turner has lived a most unconventional poet's life -- that of an infantry team leader in the US Army. HIs first book, Here, Bullet was in great part written while Brian was stationed in Iraq. In 2010, Turner published his second book, Phantom Noise which largely deals with the challenges of returning veterans. However, as Chris Abani said this morning on NPR/KUOW - our writing is never about our subject. Or I would add - the subject is just the beginning. Here's one poem so you can judge for yourself. Better yet, come out to Seattle Arts and Lectures at 7:30 next Thursday. Tickets still available here but "going quickly."

Here, Bullet
If a body is what you want,
then here is bone and gristle and flesh.
Here is the clavicle-snapped wish,
the aorta’s opened valves, the leap
thought makes at the synaptic gap.
Here is the adrenaline rush you crave,
that inexorable flight, that insane puncture
into heat and blood. And I dare you to finish
what you’ve started. Because here, Bullet,
here is where I complete the word you bring
hissing through the air, here is where I moan
the barrel’s cold esophagus, triggering
my tongue’s explosives for the rifling I have
inside of me, each twist of the round
spun deeper, because here, Bullet,
here is where the world ends, every time. 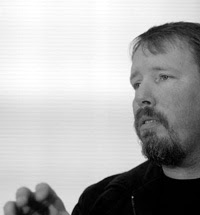 BRIAN TURNER earned an MFA from the University of Oregon before serving for seven years in the US Army. He was an infantry team leader for a year in Iraq with the 3rd Stryker Brigade Combat Team, 2nd Infantry Division. Prior to that, he deployed to Bosnia-Herzegovina with the l0th Mountain Division (1999-2000). His poetry has been published in Poetry Daily, The Georgia Review, American War Poems: An Anthology, and in the Voices in Wartime Anthology published in conjunction with the feature-length documentary film of the same name.
Email Post
Labels: Seattle Arts and Lectures