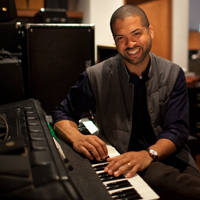 This is good news. I am utterly thrilled to see that Jason Moran, a musician and composer I met while at the Ucross Foundation, has been named as a MacArthur Fellow - or given a genius grant  as the award is often called. Jason gave our ragtag group (poets, visual artists, fiction writers) a concert his last night in residence. His work casually moved across genres from traditional jazz, to big band music, to spirituals and then the most experimental music I've ever head consisting of the sounds (not the words) from an array of world languages. The night was over five years ago, but I remember it vividly. Jason talked about "sampling" as a contribution that his generation has made to music --- he was 30 years old then, 35 now. To be honest, we were all a little in love with Jason --- in part, because it was so clear he was utterly in love with his wife. The morning he left, he gave us each a piece of music he'd written based on our names. Somewhere in my house I have a lovely note and original piece of Jason Moran music!

You can read about Jason and all the other MacArthur Fellows right here. And while it's true that there are no poets this year and only one fiction writer, it can't take away the excitement I feel about knowing that Jason is the perfect choice. He is a poet at heart.
Email Post
Labels: Jason Moran MacArthur Fellows