"Poetry's Small Planet" is a Universe to Me

Today's New York Times reviews a selection of poetry from the country's small presses. It's wonderful to see friends Brian Turner and Ilya Kaminsky featured (Ilya is the editor and translator for a Russian poet  published by Tupelo). What is even more wonderful is to be introduced to new poets. This article features many poets in translation and a few first books as well. I look forward to reading Lleshanaku and quite a few others. How marvelous to find new poets!

In his introduction to the capsule reviews, Dana Jennings laments that the mass media ignores poetry. Yet, as a New York Times editor, surely he has some power to change that.  A quick google search finds that Mr. Jennings has recently blogged about his bout with prostrate cancer: "Bidding Farewell to Ghosts of Pain". His prose style is lyrical; he leans toward poetry, even if he has not been brave enough (or foolish enough) to publish poetry himself.


Here is the beginning of the article --- congratulations to these fine poets.
The women and men who run small independent presses, often on a frayed shoestring, know in their bones that poetry is necessary if underappreciated cultural work — that poetry, even when it’s snubbed by the broader culture, has no expiration date. Here are reviews of several recent collections that demonstrate how poetry survives, even thrives, in the high-def seas of the mass media.
Enlarge This Image 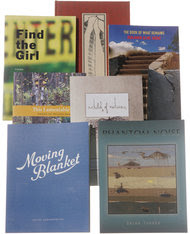 CHILD OF NATURE
By Luljeta Lleshanaku
Translated by Henry Israeli and Shpresa Qatipi
93 pages; New Directions; $13.95.
Luljeta Lleshanaku grew up under house arrest in totalitarian Albania. Born in 1968, she wasn’t allowed to go to college or publish her poetry until the early 1990s, after the Communist government fell. But her gentle poems are subtle and rarely polemical, as they dwell on her past.
Twilit melancholy suffuses her Albania, where “Soft rain falls like apostrophes in a conversation between two worlds,” family trees are “struck down by a bolt of lightning,” and most days echo with “a gray metallic loneliness.” These details coalesce to paint the Albania of her internal exile and, in the end, we feel blessed that Ms. Lleshanaku has invited us to “the takeoffs and landings/on the runway of her soul.”
Email Post
Labels: Dana Jennings New York Times Poetry Reviews Poetry's Small Planet