Skip to main content
Labels
Posted by Susan Rich May 30, 2010 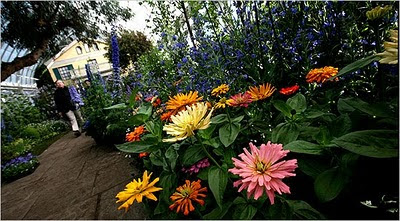 I seem to be wanting more of  Emily Dickinson's words, "A lunatic on bulbs," and gardening skills lately. I didn't know that she liked to garden at night until I read the New York Times article excerpted below. The poet Deborah Digges also gardened at night. This summer I plan to try it, too. So far, all I've done at night is kill slugs and snails.

This year, Mark Doty was in Seattle as part of the Seattle Arts and Lectures Poetry Series and he spoke about visiting Walt Whitman's grave as well as places Whitman lived. I like the idea of paying respect to the poets that have inspired me in this same way. Instead of a religious pilgrimage to Lourdes, I went to the Lake District and broke into Wordsworth's garden (many years ago). I'm interested in seeing places Elizabeth Bishop lived - Key West, Brazil, Worcester, MA. I used to love to visit the houses of famous writers when I was younger (Mark Twain's house in Connecticut, for example) but it's been years. I'd love to hear of poetry pilgrimages others have gone on. Is it cheesy or inspiring? My sense is that I would want to go to pay my respects more than anything else. Or maybe to get another glass of lemonade in Emily's garden.

We now suspect that one reason Dickinson preferred night gardening was because of vision problems: for several years in her early middle age, sunlight stung her eyes. But no such explanations are needed to justify the indoor-outdoor format of “Emily Dickinson’s Garden: The Poetry of Flowers,” an ambitious, multipart show, opening Friday at the New York Botanical Garden in the Bronx, that considers Dickinson equally as a horticulturalist and a poet, and forges links between the two.