Sending Poems into the World ~ Where Exactly? 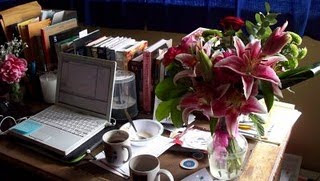 Last night I sent two packets of poems into the world. I spent far too much time trying to figure out where the poems might be happiest; which journal would provide a good home? It's humbling to admit, but I have been sending poems out into the world for almost twenty years. My first acceptance was for a poem called "Afternoon Swim" and it was accepted by Spare Rib - a London based second-wave feminist  journal. I still have the check for two and a half pounds sterling taped in an old journal. Wow.  I so believed that the acceptance phone call (!) would change everything. I was in print; I was accepted!  Little did I know ...

Today I have several strategies for sending work out into the world. I try for states (or countries) where I have not been published before; I send to magazines that have been kind to my work in the past, and I try again with an editor whom I still think might like my work eventually ....Last night I chose to send to Poet Lore because it is an impressive journal that has been kind to my work several times in the past and also to The Georgia Review because I admire the work published there. I send out new work when I really should be writing or making dinner. It is a favorite procrastination tool. I actually love the anonymous sense that my work arrives without a fancy outfit or calling card; it is what it is. Either the poem will please the editor or it won't. Yet, I know it isn't always that simple. How do other poets and writers decide where to send their work? Do you have a system? A certain inclination you follow?
Poet Lore Sending out poems Spare Rib The Georgia Review