Skip to main content
Labels
Posted by Susan Rich May 01, 2010

I am a loyal fan of Dennis Maloney, founder and publisher of White Pine Press. At twenty-two, after returning from Japan, Dennis began publishing translations of Japanese poets into English --  typing up the poems on an IBM Selectric -- "the technology of the time" as Dennis explains here.

In view of full disclosure let me say: I am honored  to be a White Pine poet with all of my books published by Dennis. It's been a little over ten years since I first received his email with the subject header "The news you've been waiting for" and then a two line message explaining that the Academy of American Poets Greenwald Fund would be supporting the publication of my work. Five years would pass until I would meet Dennis in person and during that time he seemed to me a magical presence --- communicating with me only through email.

Now, after ten years of working with Dennis, I know him to be a magical man. In  three years  White Pine Press will turn 40 - let the celebrating begin. Thank you Dennis for founding White Pine and for publishing more poets in translation than any other press last year. The poetry world - on a global scale -- is richer for your work.

SR:   Can you talk about what compelled you to start a publishing company at the tender age of twenty-two?

DM: I  studied Landscape Architecture in college and  spent my last semester doing an independent study project in Kyoto, Japan on Japanese Gardens. During my college years I began writing and later translating poetry. Two of my early influence were Robert Bly and Gary Synder. Bly was the first poet I heard read, which was in the spring of 1970. Our English professor at the time recommended his work  based on his anti- Vietnam war stance (this was the time of Teeth Mother Naked at Last).  I read his poetry and his work in translation led me to the Spanish and Latin American poets including Pablo Neruda, Antonio Machado, and Juan Ramon Jimenez all of whom I would later translate myself. He also introduced me to the work of a wide variety of poets including James Wright and Tomas Transtromer.

I intially discovered Gary Snyder’s work in used copy of A Casebook on the Beat, which was an early anthology of the Beat writers. I was blown away by both his own poetry and especially his translations of the crazy Chinese hermit-poet, Han-shan. I deeply read Snyder’s work and he lead me back into the long and rich Chinese and Japanese poetic traditions. I had the opportunity to hear Gary read a couple of time in college. He gave one of the best pieces of carreer advice for poets I ever heard. He suggested that one consider poetry an advocation rather than a vocation and that you learn a trade since there was little chance that poetry would support you.  Still I think good advice for a beginning poet.

While I was in Kyoto, in addition to my Japanese garden project I was also writing poetry and while I was there met two American poets, Edith Shiffert and Cid Corman, both long term residents of Kyoto. Cid was fairly well-known in the States thank to his magazine, Origin but Edith was not.
During college I began doing some translations from the Spanish with two years of high school Spanish and a big dictionary. That along with reading what I could find of work in translation  lead me to many wonderful voices that were little known in the US. I realized there was not a lot of  poetry in translation being published in the country aside from the small literary press pioneers like Bly’s Sixties Press. It occurred to me that it might be interesting to start something to publish both poetry in translation and the work of lesser known poets like Edith Shiffert, who I met in Kyoto. After returning home in the late spring of 1973 and graduating I decided to start a small publishing venture not knowing at all what I was doing or how to do it. I wrote to a couple of other publishers and magazines asking for some advice. I also had very little money so I started out doing poetry postcards and chapbooks. It was about five or six years before we did our first book with a spine on it.

Our early efforts look crude by today’s standards but reflect the technology of the time, which was the IBM Selectric typewriter. After Elaine LaMattina became involved with the press we were able to upgrade to professional typesetting and then with the advent of computers to computer typesetting. Her genius at design and layout has allowed us to produce the lovely books we publish on the shoestring budget we publish them on.

SR: Why the name White Pine? Are these trees that grow near where you live?

DM: When I was looking for a name for the press I wanted something that was connected to the land and the area of upstate New York, where I was from and lived. The White Pine tree was a major tree of the North-east forest and also had a prominent place among the Iroquois nations as the Tree of Peace. The tree was repeatedly logged out, except for a few small preserves set aside, because it was very useful as lumber.

SR: You are a poet as well as a publisher. Do you see these two roles as being complimentary in certain ways?

DM: I started the press because I was a poet and translator. That was the motivation to be crazy enough to try and figure out how to do this. Most of the small literary publishers of the time either were motivated by the need to get the work out or were letterpress printers who were interested in the craft of printing. Certainly none of us got in it for the money, since even to this day it is a struggle to keep such ventures going. I took Snyder’s advice to heart and since I learned the trade of Landscape Architecture in college put it use working for the City of Buffalo for thirty-four years as a landscape architect designing parks and urban spaces. I have since retired and am enjoying my retirement check each month.

SR: Publishing poetry in translation is a key component to what you do. Is there a growing interest in international poets as the world becomes more connected?

As pointed out above, poetry in translation was one of the main reasons for starting the press. Here we are almost four decades later and the percentage of literature in translation published each year in this country is less than three percent of the total amount of books published. So there is still clearly work to be done. Surprisingly, after four decades, it is still largely the small literary publishers and university presses that are publishing the majority of work in translation. The online translation website Three Percent tracts all the translations published in the country every year. In 2009 White Pine Press published more volumes of poetry in translation than any other publisher in the country, which I find both gratifying and shocking. I am stunned and amazed, particulary given our rather small budget, that we could have such an impact on the world of translated literature.

SR: It’s been nearly 40 years since you started White Pine. Is there a spiritual component of this work for you? This ushering of poetry into the world?

As a publisher we are akin to a midwife in the birthing of writing into the world. I certainly consider editing and publishing part of my practice. Gary Snyder once said of James Laughlin, the founder of New Directions, that he created a big Mahayana tent under which a great diversity of voices flourished. I like to think that we have created something similar minus the several  million dollars in inheritance that Laughlin had to start New Directions.

We recently published Finding the Way Home : Poems of Awakening & Transformation, an anthology I edited, that contains work that spans two milleniums and contains voices range from ancient China, Japan, and India to contemporary America and Europe. The work is mainly drawn from books we have published over the four decades and I think reflect this spiritual aspect you ask about.

The great Japanese poet Basho referred to his practice as Kado, the way of poetry. He thought of poetry as a way of life and source of enlightenment. He also suggested that as poets we ”don't follow in the footsteps of the masters but seek what they sought.”

So I think have always been looking at poetry of the spirit and looked at publishing and editing as part of that larger practice of poetry. 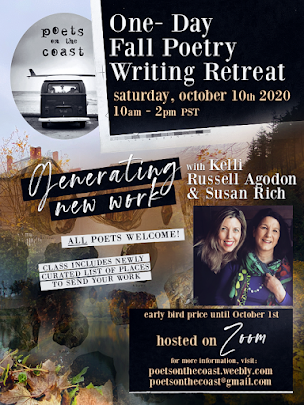