Skip to main content
Labels
Posted by Susan Rich May 31, 2010 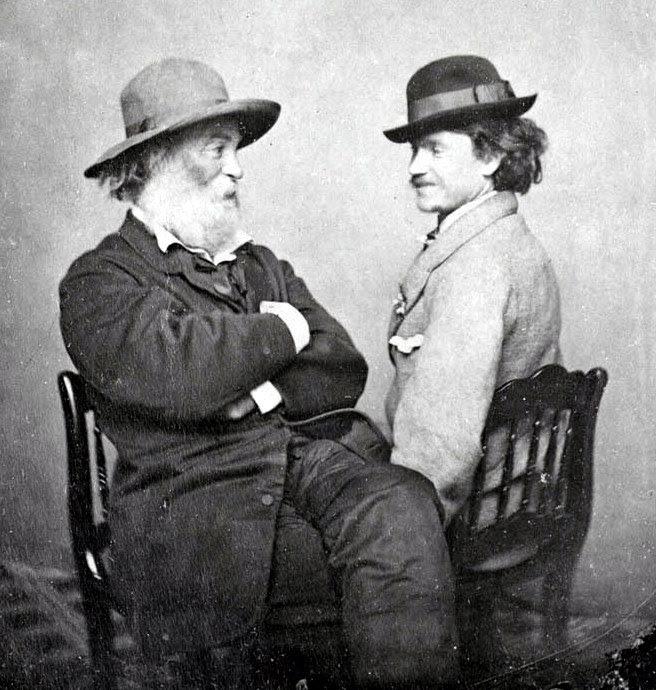 This is Walt Whitman with Peter Doyle, a man with whom Whitman is believed to have had an intimate friendship. Does it matter so much? Their ease in the photo is what draws me in. I've never been (dare I admit) a huge Whitman fan, but I love the influence he has had on American poetry. I can't imagine Adrienne Rich's Atlas of a Difficult World without the work of Whitman or more recently, Mark Doty's Mercy on Broadway or Mathew Dickman's All-American Poem. Whitman allows, I think, for the grand gesture, the wide wave of our daily world transfigured into America with a capital A (or at least the United States - which is what I mean here).

A few years ago I attended a conference where Cody Walker was teaching a class and using Walt Whitman as his text. I don't remember the exact subject of the session, but I do remember how much Cody loved Whitman's work. And for that two hours, I fell in love with Whitman, too. Here is one of the poems that I re-discovered that day. It's stayed with me and at the moment I am using it as a shadow poem for one of my poems. Thank you Cody, thank you Walt Whitman.

When I Heard the Learn'd Astronomer

When I heard the learn'd astronomer;
When the proofs, the figures, were ranged in columns before me;
When I was shown the charts and the diagrams, to add, divide, and
measure them;
When I, sitting, heard the astronomer, where he lectured with much
applause in the lecture-room,
How soon, unaccountable, I became tired and sick;
Till rising and gliding out, I wander'd off by myself,
In the mystical moist night-air, and from time to time,
Look'd up in perfect silence at the stars.
Email Post
Labels: Cody Walker Walt Whitman